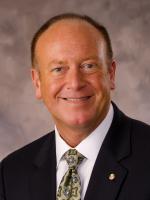 John Higginbotham is CEO of Bank of Oklahoma – Oklahoma City, a division of BOK Financial, a top 25 U.S. based financial services company. He has been with the company nearly 30 years most recently serving as the Oklahoma City market’s president and chief operating officer.

Higginbotham spent many years on BOK Financial’s commercial lending team, where he served as manager of the corporate healthcare team. He also worked in audit and credit analysis.

He graduated from Oklahoma State University with a Bachelor of Science in Business Administration.